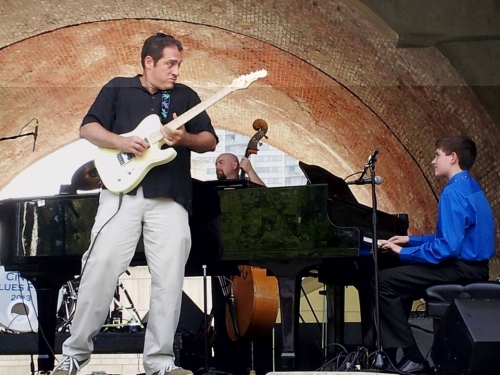 When pianist Ben Levin made his first guest appearance with his father’s band, the Heaters, at the tender age of eleven, he already had an impressive musical resume, having twice performed at the Cincinnati Blues Festival as well as Chase Garrett’s Boogie Stomp in Iowa. Now, three years later, Ricky Nye’s protégé is a seasoned veteran in a gigging band, and has, as his father, Aron “The Professor” Levin, puts it, “breathed new life” into a band that has been a Cincinnati Blues mainstay since 2000. Despite the father/son connection, this is no novelty act. The Heaters, featuring Cincinnati Blues icons Stan Ginn on drums, Jerry Hedge on Bass, and Leroy Ellington on tenor sax, takes the Delta and Chicago blues that the band has been playing for years, and, with Ben’s indomitable left hand, now sprinkles in a healthy dose of New Orleans to make an exciting musical gumbo. The Heaters have always been one of the area’s most solid, professional blues bands. With Ben Levin in the mix, they’ve become something special. The Heaters with Ben Levin open the 2014 Winter Blues Fest at 6:15 in the 1st Floor Presidents Room