You are here: Home / Winter Fest Rio & The Ramblers 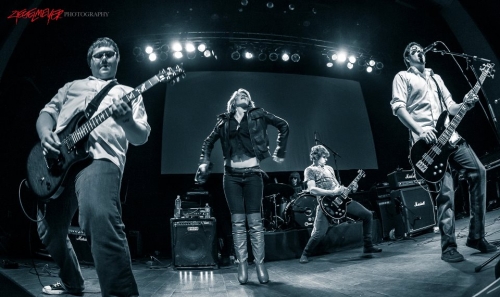 Rio and The Ramblers is a five piece blues and classic rock influenced band from the Northern Kentucky/Cincinnati area. Rio and The Ramblers have a unique sound that blends standard blues and soul with contemporary rock and roll. Rambling together since December 2012, they have placed as finalists in The Madison Theater Band Challenge, competed in the International Blues Challenge in Memphis, TN and are currently writing their first EP due to be released in June 2013.

In December of 2012 a new high energy, hard rocking blues band came alive, Rio & The Ramblers. The band was formed by Lead Guitarist Ryan Snyder, Bassist Eric Torres, and Drummer Alex Miller. Before Rio & The Ramblers, the three were in a high school band called AbsoluteValue. Struggling for a month to find a lead singer, Ryan called long time friend and band mate Rio Van Risseghem to fill the spot of Lead Singer. Along with Rio, bassist Eric Torres called up his other band mate from Exit 186, Joe Schutzman to fill in for Rhythm Guitar. The five then became Rio & The Ramblers.