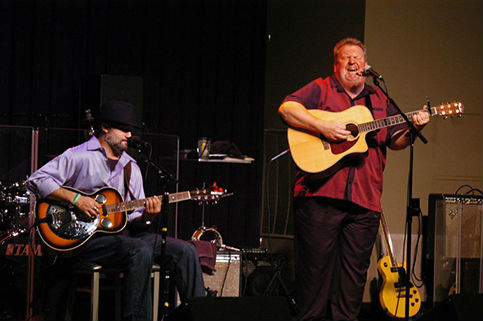 Leo Clarke will be returning to IBC for the 3rd time in four years and has previously won three blues challenge titles, the Pomeroy Ohio Blues challenge once and the Columbus Blues Alliance Challenge twice. His self-produced 2012 album, “Leo Clarke”, was voted 17th on 89.7 WNKU’s “Top 89 Albums of the Year.”  This second album not only showcases his vocal, guitar, and harmonica talents, but also displays his crafty song writing ability.  When Leo isn’t teaming up with Chuck, he can be found performing solo and with his band, “The Leo Clarke Band”.  Leo has been nominated for “Best Blues” by Cincinnati CityBeat magazine two years running.

Chuck Brisbin is recognized as one of the Best Vocalists in the Tri-State area (Ohio, Indiana and Kentucky). Chuck’s powerful, soulful voice can be found in his solo performances and in harmony with some of the best musicians in a duo, trio or his full band, “Chuck Brisbin and the Tuna Project”. Chuck also plays guitar and is a master on the Mississippi saxophone. He is heavily involved with the Cincinnati Blues Society and the director for the Blues in the Schools Program (BITS), which helps share the spirit of the blues with the next generation. His partnership with Leo Clarke resulted in a win at the 2013 Columbus Blues Alliance Blues Challenge.