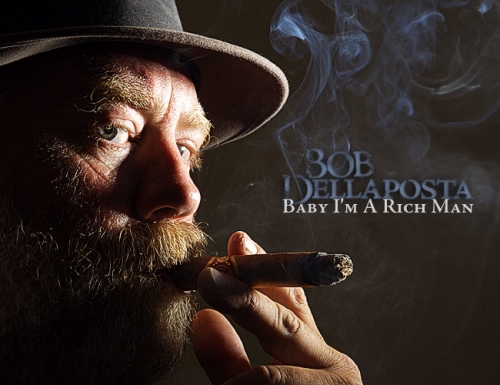 Bob has been performing acoustic blues and rock music in Southwest Ohio and Northern KY for more than 25 years. He was born and raised in Bellevue, KY performing his first gig for money when he was just 15 years old. He moved to Franklin, OH when he was 16. After graduating from high school, he quit his job and college to head to New York City to make his mark on the music industry, and he came away with lots of bittersweet memories. “We did land a job performing at Kenny’s Castaways on Bleeker St. in Greenwich Village, but most of our money came from being street performers”. He has been a familiar entertainer in local clubs and night spots singing what he calls blues based music with rock-n-roll influence. He has shared the stage with guitar greats Walter Trout and Johnny A., blues legends John Hammond, John Lee Hooker Jr. and Doug Macleod, and Americana roots blues and rock master Delbert McClinton. In 2007, Bob released “Baby I’m a Rich Man”, a collection of original blues and rock tunes with a host of area musicians. In support of its release, he began touring with his current band "The Broken String Band". In Dec. 2009, prior to opening the show for John Hammond @ Taffy’s of Eaton, it was announced, that Bob would be the first inductee of the Taffy’s Hall of Fame for his contributions to Taffy’s and volunteerism for community fundraisers. He has been described by Tunes & Trends magazine as "Hard to miss and impossible to ignore" and Guitar Digest described him as "a genuine blues cat who always strives to give the audience his best".