You are here: Home / Balderdash 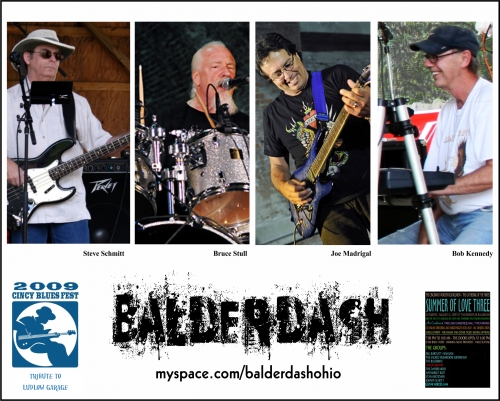 Balderdash was formed in 1966, and was active in the Ohio reginal music community. Balderdash
apeared frequently at the Ludlow Garage in Clifton, and was teh opening act for many top bands of
the era including Emerson, Lake & Palmer, Frank Zappa, The Allman Brothers, Traffic, Grand Funk Railroad,
Alice Cooper, Ted Nugent, and many others.  BalderDash disbanded in 1972, and reemerged at the
2009 Cincy Blues Festival (Ludlow Garage Reunion), and the Summer of Love Concert. Band members
include Bruce Stull, Drums and features vocalist, JoeMadrigal( myspace.com/joemadrigal), Guirtars,
supporting vocals, and harmonica work, Steve Schmit, Bass & vocals, and Bob Kennedy, Keyboards & vocals

The Cincy Blues Society is a member-supported, 501(c)3 not-for-profit organization whose purpose is to promote and advance the culture and tradition of Blues music as an original American art form. Formed in 1990, the Cincy Blues Society strives to fulfill its mission by encouraging and facilitating both performance and educational events and projects. Our focus is on “Keeping the Blues Alive!” Learn More